THE MYTH THE TRUTH

Veldhoven, 11th December 2009 (SRF) – According to a statement by the Scientific Advisory Board of the Dutch Health Council, there is nothing wrong with tanning outdoors or in the solarium...as long as it’s in moderation. As the scientific panel continues in its letter to the Dutch Health Council which deals with health and consumer protection, on no account can it be guaranteed that the use of solariums is accompanied by a higher risk of skin cancer. Furthermore, the Health Council expresses major reservations concerning the decision recently taken by the International Agency for Research on Cancer (IARC) to raise the category of UV-radiation and solariums to cancer risk category one. The supporting scientific documents provide no basis for this. In the statement the scientists belonging to the high-ranking panel also explain the positive effects of sufficiently supplying the human body with vitamin D, which, stimulated by UV radiation, is produced over 90 percent in the skin.

“It is a very positive sign that a renowned institution such as the Dutch Health Council exclusively sticks to objective, provable criteria when evaluating tanning and draws well balanced conclusions from this“, comments Ad Brand from the Sunlight Research Forum (SRF) with regards to the statement by the Scientific Advisory Board.

The Dutch Health Council is the Netherland’s most important scientific panel in the domain of health. Its studies, statements, and recommendations often form the basis for legislative proposals.

The Sunlight Research Forum (SRF) is a non-profit organisation with its headquarters in the Netherlands. Its aim is to make the latest medical and scientific findings concerning the effects of moderate UV radiation on humans open to the general public.

·         The Dutch Health Council’s statement: “Advisory letter UV radiation and sunbeds” can be downloaded from the SRF website www.sunlightresearchforum.eu.

·         Further information about the Dutch Health Council is available at www.gezondheidsraad.nl/en

The Truth About Indoor Tanning

THE MYTH THE TRUTH

Ultraviolet light has been linked to certain types of skin cancer, but no one understands exactly how. And ultraviolet light plays an important role in the development of all life. Heredity, diet and repeated sunburn are the biggest risk factors for non-melanoma skin cancer. Consider that one 1995 study reported that people who followed a low-fat diet had 90% fewer skin cancers. It's clear that sun exposure is not the only factor in this disease.

There is no such thing as a safe tan.

Actually it isn't safe to totally avoid the sun. Remember, sunlight is the source of all life on our planet. Plus, research suggests the benefits of regular, moderate sun exposure may outweigh the risks of overexposure, which easily can be minimised by merely avoiding sunburn. Moderate indoor tanning, for individuals who can develop a tan, is the smartest way to maximise the potential benefits and minimise the potential risks associated with either too much or too little sunlight.

But some doctors say that tanning causes melanoma...

This rare form of skin cancer is still a mystery. It is most common in fair-skinned people with a family history of melanoma. Though some research suggests a connection to ultraviolet light, many studies have shown that people who receive regular sun exposure have less chance of getting melanoma than those who don't. Also, it is most commonly found on unexposed areas of the body like the lower trunk and legs.

There is an epidemic of skin cancer in the world today.

No, there isn't. Epidemics are events that happen suddenly and affect more than half of a group of people. Skin cancer rates have been rising steadily in the world since the early 1900s.

Skin cancer rates are rising because more people tan today than did in years past.

Actually, skin cancer rates have risen steadily in the 1900s. And society spent less time outdoors last century than in any other. Remember, most people worked outdoors until the industrial revolution in the late 1800s. It could be said that since people do not receive as much regular sun exposure, which makes them more susceptible to sunburn when they go outdoors, may be linked to the increase in skin cancer this century.

The HIV virus dies on exposure to oxygen, and would not survive on a sanitized tanning bed. (Solar Scape only uses an all in one Anti-Viral, Anti-Bacterial & Anti-Fungal sanitizer.) What's more, the U.S. Centres for Disease Control says the odds of contracting any virus from a tanning bed are "extremely remote".

That's absolutely false. Indoor tanning clients are exposed to a scientifically controlled dosage of ultraviolet light carefully formulated to tan you and minimise your risk of sunburn. That kind of control is virtually impossible outdoors, where variables such as seasonality, time of day, geography, weather conditions, altitude and the Earth's thinning ozone layer make sunburn much more likely. Because sunburn is the main risk factor for skin damage, it's actually smarter to tan indoors.

I heard about a woman who fried her internal organs from too much tanning...

'The Legend of the Roasted Tanner" is a farce. Ultraviolet light, whether from the sun or from a tanning unit does not penetrate your skin. It is impossible to "fry" any internal organs on a tanning bed.

I heard that tanning isn't as popular as it used to be.

Not true. More than 30 million Americans tan indoors, a number that increases steadily year after year. More and more people are tanning for the control, convenience, benefits, speed and pure enjoyment of tanning on a sunbed.

Indoor tanning is like a cigarette for your skin.

This is a ludicrous comparison. Smoking subjects your lungs to an unnatural compound that your body is not designed to process. Tanning is your body's natural reaction to sunlight. Your body is designed to tan to help prevent sunburn. Your body is not designed to process cigarette smoke. Furthermore a smoker's risk of contracting lung cancer is hundreds of times higher than a non-smoker's risk. That's not the case with those of us who tan. Most importantly, there are no known benefits with cigarette smoking. Research suggests that there may be many benefits with regular sun exposure.

If all this is true, why do I still hear that tanning is bad for you?

Anyone who makes the blanket statement that any tanning is bad for you probably has not read much on this issue. And you have to remember that many industries make billions of dollars scaring people about sunshine. Multibillion dollar pharmaceutical firms that manufacture sun-screen lotion fund the studies and promote the findings, often out of context.
Servicing and Repairs to all leading Sunbed brands. 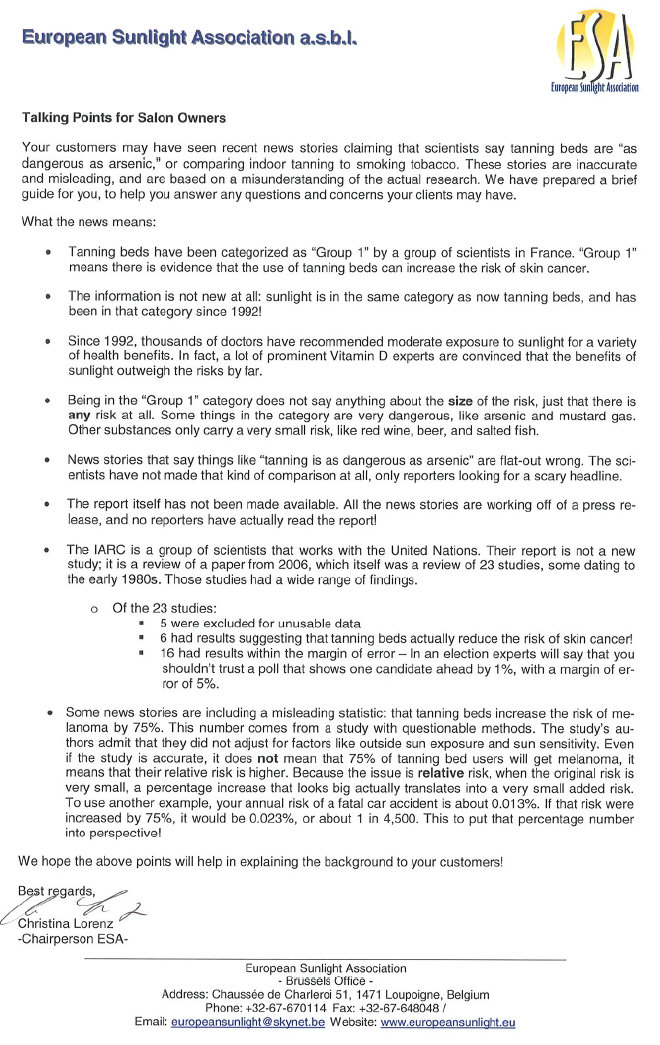 Brussels, 30 July 2009 (ESA) — The European Sunlight Association (ESA) condemns the hype related to the recent categorization of tanning beds as a “Group 1” carcinogen.

“The European Sunlight Association will not stand by and allow to unfairly malign our products and the thousands of small business owners who are our members, by grossly exaggerating the risks associated with tanning beds,” said ESA’s chairwoman, Christina Lorenz.

“Because tanning beds produce the same UV light as the sun, OVEREXPOSURE and abuse of our products - just like OVEREXPOSURE to sunlight - is associated with an increased risk for some types of skin cancer. Other items in this category are red wine and salted fish. Scientific studies suggest that drinking red wine or other alcoholic beverages carries a greater cancer risk than tanning.  It is completely irresponsible to compare indoor tanning with mustard gas or arsenic as so many media reports have done”, stated Lorenz and continued: “Media reports comparing indoor tanning to toxins like mustard gas, cigarettes, and arsenic are outra­geously overhyped. The same “group 1” category includes red wine, salted fish, and regular sunlight. These sensational headlines are as absurd as saying ‘A glass of merlot is as deadly as mustard gas’. UV light from a tanning bed is the same as UV light from the sunshine, which has had the “group 1” classification since 1992. So it’s no surprise that tanning beds have now been put in this catego­ry as it has long been understood that OVEREXPOSURE to UV light, whether from the sunshine or a tanning bed, is associated with increased risk of some forms of cancer. This is why the European Sunlight Association has always emphasized the importance of moderation.